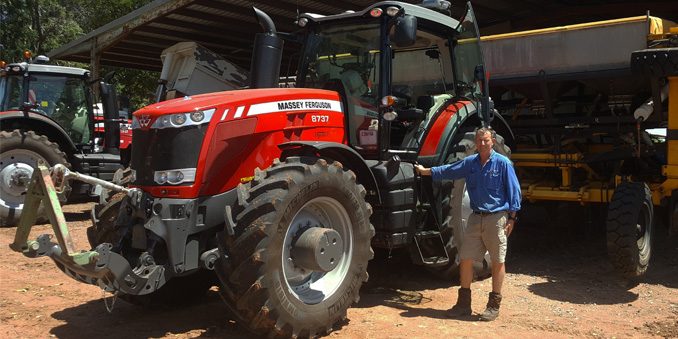 “Massey Fergusons are built with logic. They have an open design to access hydraulic hoses and cables and air-conditioning and air fittings. It is all simple enough that we could fix it if we had to.”

Oasis Farms is literally an oasis in the Kimberly region’s scrub county. Fritz Bolten and his family crop 2000 ha near Kununurra, northern Western Australia. Fritz says he has beautiful soils and an abundant water supply: 800mm from Christmas to March and irrigation from Lake Argyle, the second largest artificial lake in the Southern Hemisphere.

Reliable machinery is vital for the operation and it recently prompted the family to switch to Massey Ferguson. They had run another brand of tractor for 36 years, but when they doubled the size of the farm in 2013, they needed more tractors to step up to the task at hand.

His laser-levelled seedbeds are 1.8m wide to facilitate gravity-fed irrigation, and the tractors work on tramlines and carry 9.0 m-wide implements for cultivation, fertilising and other tasks. All implements are on three-point linkage.

The MF 8700 tractors arrived in March. Fritz says reliability was a primary concern. “Customers don’t buy tractors to brag to the neighbours or to look sexy. We want them to be reliable.”

He also values a manufacturer that has sensible designs that work.

“Massey Fergusons are built with logic. They have an open design to access hydraulic hoses and cables and air-conditioning and air fittings. It is all simple enough that we could fix it if we had to.”

Back-up is also crucial, both from local dealer Craig Marangoni at Wattleup Tractors, and from Massey Ferguson.

“AGCO sent someone to train us. That should be standard for anybody buying a new tractor, especially one as capable as these ones. It was crucial for us to operate them properly.”

“We are used to continuously variable transmission. We really like it and we can fine-tune our work. We can change speed by 0.1 or 0.2 kph on the run and when we feel the load is increasing we stop at that setting. It means we work at maximum efficiency all the time.”

Another big issue for Fritz was avoiding a tractor that needed a diesel exhaust fluid.

“These models were the ones available without Adblue. Maybe it’s the tropics or the warmer weather or a combination, but the previous one we had just wasn’t working. We were flying people up from the south so often to fix them, that any emissions we saved, they used.”

“We have noticed that good torque. We are running at lower revs than expected and using less fuel. The engines have plenty of power and just sound good.”

Precision farming is facilitated through the AgCommand GPS system on autosteer. All is going well and Fritz says he is happy with the Massey Fergusons’ performance. He expects to be buying more in the future.